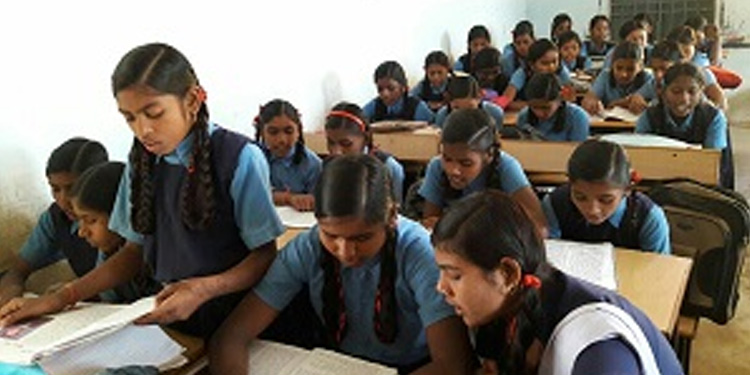 For the largely tribal population of Chhattisgarh, where large tracts of land are hilly and forested, encouraging open defecation, the transition to use of indoor toilets has been a big challenge.“We didn’t have a single toilet in my school before. We used to go behind the bushes around our school to ensure that there are no penetrating eyes”, says 13-year-old Payal from Sonth village in Raipur, Chhattisgarh.Recently, two toilet blocks — one for boys and one for girls — were installed in Payal’s school as a part of first phase of Mission SoS (Sanitation in School). CII Foundation (CIIF) launched the initiative in 2014 and worked with companies to construct, operate and maintain toilets in various Government Schools across the country. The campaign also aimed at identifying, evaluating and documenting innovations/ good practices in technology, design and behavior change practices in sanitation domain. CIIF facilitated construction of 4193 toilets through corporate engagement and contributions of approximately INR 90 crores to the Swachh Bharat Kosh. CII also directly undertook construction of 203 toilet units, out of which 44 are in 33 schools of Chhattisgarh.“Some students especially girls, had to walk a long distance to cater to their ‘daily need’. It was worse for the younger girls, since they had to be accompanied by an older girl or move in groups of 2-3, in turn missing out on important lessons in class. Toilets in the school have given a chance of more dignified life to these girls”, says a teacher.The major problem though, is not just constructing toilets but using them. In remote villages like Sonth, where people are used to the idea of ‘open air’ for waste disposal, change is not achieved by the simple act of building toilet facilities. According to an all-India survey conducted by the National Sample Survey Office (NSSO), not even half the toilets built under the cleanliness mission are being used. While just 46% of 95 lakh toilets built in rural India are being used, the figure is barely 50% in urban areas.“The impact of any sanitation project lies in usage of toilets by the community, and ensuring their proper operation and maintenance. While working on the ground, we noticed that there is a pressing need to create awareness on how proper waste disposal and better hygiene can reduce the risk of infectious diseases, particularly to vulnerable groups such as children. The CII Chhattisgarh State Council is working towards finding effective ways to create awareness on WASH (Water, Sanitation and Hygiene) facilities in communities”, says Mr. B.L. Agrawal, Past Chairman, CII Chhattisgarh State Council and Managing Director, HIRA Group of Industries. Multiple companies like HIRA Group of Industries, Mahindra Sponge and Ispat, Sarda Group and Bhilai Engineering Corporation among others came together to provide financial support to Mission SoS in Chhattisgarh.Along with construction and O&M of toilets, WASH training is given to the students and teachers of intervened Government Schools in Maharashtra, Bihar and Tamil Nadu. Committee members consisting of teachers have been constituted to oversee the day to day cleanliness of the toilets.Moving to open defecation challenges in urban areas, CIIF launched the second phase of Mission SoS with the aim to construct Public Community Toilets by engaging with community, industry and Urban Local Bodies. The second phase aims at constructing 2000 toilets across 60 cities in the next financial year. To begin with, CIIF is piloting the project in Delhi, where construction of 15 toilets funded by Mahindra and Mahindra, DCM Shriram, JK Tyre & Industry Ltd., Mitsubshi Corporation, JCB along and CIIF, is underway. The initiative will also be taken forward in other cities / locations as identified by the state governments and shared with CII.