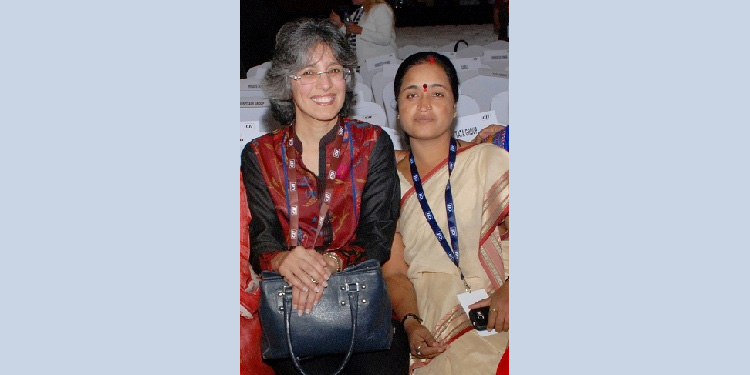 I was awestruck by Lata’s aura and personality, when I first interacted with her. A valiant leader, Lata’s story of courage and struggle out of exploitation towards being a changemaker, is extraordinary. Being a member of the Steering Committee of the CII Foundation (CIIF) Woman Exemplar Program, I first met Lata at the award ceremony and later, at a capacity building workshop organized by CII Foundation for its women exemplars, in Delhi last year. The workshop was the first in series of other capacity building workshops, bringing together grassroot women exemplars across the country. For me and the Thermax Group, social development is not just CSR, but a passion I have inherited. And women empowerment is not a choice, but an imperative. CII Foundation has been promoting and enabling women empowerment, especially at grassroots through its unique CII Foundation Woman Exemplar Program. The Program celebrates the tireless spirit of women leaders at the grassroots, who have overcome grave personal challenges, to create transformative work impacting communities and providing new paradigms for social development in the field of education, health and micro-enterprise. Lata Mane, the CII Foundation Woman Exemplar of 2014 in the Health category is one such nation builder who fought sexual exploitation and HIV to provide health and alternate livelihood support for Female Sex Workers in Kolkata. At the age of 15, unable to bear the atrocities of her step mother, Lata ran away from home in Karga, Karnataka. After working as a daily wage labourer in a couple of places in Maharashtra and Goa, she married a fellow worker at the age of 17. Later, her husband sold her to a brothel owner in Mumbai, who compelled her to enter in the sex trade. It’s heartbreaking to listen to the atrocities these women face every day. And at the same time these are the stories of how sheer grit, courage, determination and little support can help them transcend personal and social limitations. With modest backgrounds, the women exemplars fight all odds to become leaders of change in their communities. I am privileged and humbled to be a part of this unique program. In 2002, with support and encouragement from an NGO, Vijay Krida Mandal, Lata became an Outreach Worker, to create awareness on sexual & reproductive health and provide psychological support to the female sex workers, living with HIV/AIDS. To compensate the low remuneration, she underwent training in perfume and jewellery making and started her own small enterprise. She made a Self Help Group (SHG), involving other sex workers, encouraging them to quit sex work and choose alternative livelihood opportunities. Through this SHG, Lata procured a cleaning and waste collection contract from the Municipal Corporation. Of the many accomplishments gathered by Lata, what fascinated me most is the fact that unlike most of her peer workers, she wriggled out of the flesh trade and established herself on the other side of the wall, yet preserving that sensitivity and empathy towards her fellow friends. Her dedication towards improving the conditions of the sex workers in the area made her known as “Ma” by the people in Rohtakwadi area. Interestingly many people in the area did not know her by her name until she received the CII Foundation Woman Exemplar Award in the Health Category in 2014! Selected by an eminent panel from Industry and the social sector, the awardees are shortlisted through a rigorous selection process, from hundreds of nominations received from various NGOs across the country. Since its inception in 2005, the program recognizes and felicitates the courage, conviction and compassion of these exemplary women and empowers them further, through mentoring and capacity building. CII Foundation, through this program, is bringing unsung heroes in the limelight, who are being toasted by institutions of high repute including the NITI Aayog, recognizing the exemplars through its Women Transforming India Award. This acknowledgment and recognition is not just limited to awards. During one of our meetings, Lata shared that the recognition from CII Foundation got her respect from the local community; government officials helped her expand her work and encouraged other sex workers to follow suit. The Woman Exemplar Mentoring Program has further helped Lata chart a business plan in perfumery, catering and sanitary napkins. She is extremely enthusiastic of her recent venture of selling low cost sanitary napkins, involving other women like her. Being an avid learner, Lata knows five different languages and is learning to speak and write English. My long association with the CII Foundation Woman Exemplar Program has not only given me the opportunity to meet and recognize some real women heroes, but also given me incredible insights on dealing with arduous challenges and attaining new heights. Today, Lata Mane is a courageous and expressive woman, an ideal and inspiring example to her community. And I, like many others continue to be inspired and humbled by her. CII Foundation has announced its 14th Edition of Woman Exemplar Program. For more details click here Woman Exemplar Programe