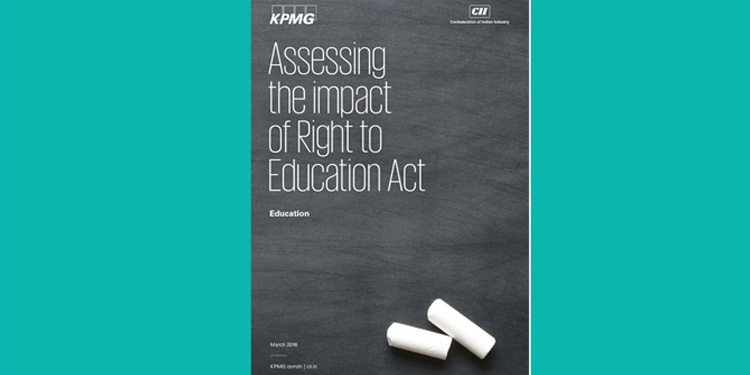 Assessing the Impact of Right to Education Act

03 Nov 2016
A Report Published by CII and KPMG in March 2016
After six years of implementation of RTE Act, there is no denial that the Act has led to an improved net enrolment rate in primary education, increased awareness among the states to abide by the curriculum mandate under the Act, and significant improvement in the social infrastructure of schools. Yet, the Act was been less than successful in providing an adequate focus on quality in education.
‘Assessing the impact of Right to Education Act’ report, published by CII and KPMG in March 2016, is an attempt to take stock of the progress of the Act. The report analyses where we stand with respect to the implementation and impact of the RTE Act. The initial sections cover the impact of the Act in various states and its adoption stages. The paper also attempts to highlight the various challenges faced by stakeholders in implementing and realising the benefits of the RTE Act. The section on global best practices gives a glimpse of what is happening with respect to similar attempts across the world. The paper concludes with some pertinent recommendations for various stakeholders who shoulder the responsibility of the RTE Act implementation across states. • Kerala has achieved an average PTR ratio of 26:1 which is better than the mandate• Tamil Nadu has admitted the maximum number of students under the RTE Act.• Forty three per cent of the kids in government schools of Delhi reported they had no functional toilet in their school. Forty seven per cent of the kids agreed they had no clean drinking water• In 2015, 92 per cent of the schools in Odisha did not meet the prescribed standards. Also, 82 per cent schools have no electricity facilities.Challenges in Implementation of RTE• No detention policy which was meant to help the student learn in a stress free environment has actually defeated that purpose by decreasing the motivation of students for learning.• RTE emphasis on age of student at the time of enrolment and not on intellectual growth• Extremely challenging for teachers to teach students from varying background in the same classroom• Lack of adequate teacher training• Ineffective School Monitoring CommitteesSome Recommendations• Raise awareness among parents regarding the potential benefits of the RTE Act and disseminate information to the SMC members about their role and responsibilities• RTE should be decentralised and to avoid ambiguity in the roles of SMCs, state government and local authorities, the Act should clearly demarcate the roles and responsibilities.• Each and every state should notify an income limit for admission of EWS students in private unaided schools, as it is not possible to dictate the determinants for income limits in law• The creation of a ‘one window’ RTE Commission directly accessible to all stakeholders is a necessity to translate the potential of RTE to a reality.• Improving the physical infrastructure and human resources is a must for effective implementation of the Act. In this regard, Public-Private Partnership models could be explored.• It is essential for state governments to focus on quality of education and introduce evaluation methods which test children’s conceptual understanding of subjects in the lower classes.• In order to improve the educational standards, the government ought to introduce a national school standard of education which is a practice globally.

Source: Assessing the impact of Right to Education Act- a report, published by CII and KPMG in March 2016
Click here for full report