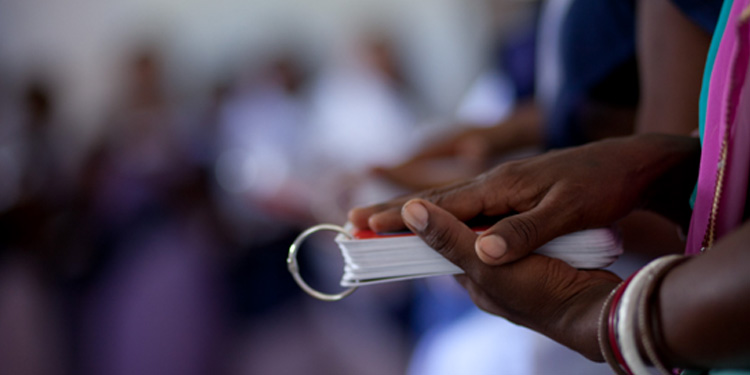 01 Apr 2016
Contributed by Radharani Mitra, National Creative Director & Executive Producer, BBC Media Action
There are 22 women with Sarika in the room. They are standing in a circle, wearing white and blue-bordered saris, taking an oath, their right hands placed on red mobile phones.
But if you look carefully, you will see it is not a phone but a deck of cards on a ring. It is an audio-visual job aid called Mobile Kunji, which along with Mobile Academy, an anytime, anywhere audio training course delivered via the mobile phone are the two mHealth innovations designed by BBC Media Action for one million community health workers of India.
These services were originally designed for use in Bihar where BBC Media Action, the BBC’s international development charity, in partnership with the state government, works to improve demand for health services, improve social norms and impact health outcomes for mothers and children.
Think rural India – there are communities where getting pregnant and having babies can be 24 times more life-threatening than giving birth in the United Kingdom!
The statistics are pretty stark. Globally, every five minutes, three women die from complications related to pregnancy or childbirth, while 60 others will be left with debilitating injuries. Of these deaths, India accounts for the greatest number of women dying – over 150 every day. But we know how many of these health risks that pregnant women and their newborns face are preventable. And last-mile messengers like Sarika can play a critical role.
When we set out to design a solution that would empower community health workers like Sarika to help play this role better, we started with one of the core BBC values: Audiences are at the heart of everything we do. Sarika is a woman from the community itself. Is she considered a credible source of information or is her familiarity a disadvantage? Does she really think she can save lives and make a difference? Or does she feel like a cog in a giant wheel? These explorations led us to a key insight – Sarika needed further ‘professional-ising’, in a way that would mark a paradigm shift in re-training and retooling her. To increase Sarika’s skill, confidence, trust and credibility.
Using appropriate technology
This was 2011. Mobile penetration was nearing 90%. Smart-phones, apps and data-enabled solutions were getting everybody excited. Reaching the most marginalised, hardest-to-reach communities seemed finally possible!
99% of the health workers were already using mobile phones. But only to send or receive calls. No data. No apps. Not even text!
We needed ‘appropriate technology’ that would help us get around the challenges of procuring, distributing, maintaining and replacing expensive new hardware. So we went back to voice and used IVR (interactive voice response).
Box: “BBC Media Action’s killer app is the phone call.” Anne Nelson – Professor Columbia University
Design thinking
Could we create standardised content to train thousands of health workers at a fraction of a cost of face-to-face training?
The 190-minute Mobile Academy audio course is designed to guide the health worker through 11 chapters. Ending each level with a quick, short interactive session that works – like every other thing on this platform – without elaborate menus and sub-menus. Sarika can go through the course at her own pace and convenience as it is bookmarked, getting a certificate once she has completed it. Mobile Academy is designed not only to refresh her knowledge but also to improve her communication skills. But how can she use her freshly-acquired skills with the new and expecting mothers and their families. Could traditional one-to-one tools like flip charts accommodate 11 health behaviours and over 100 attitudinal, normative and belief arguments? We needed something nifty that could be carried at all times by Sarika. Heavy video formats with hardware dependencies were out.
The solution was Mobile Kunji. A pocket-sized multi-media job aid. A colour-coded deck of cards shaped like a phone. That links each message back to the humble phone. For more details on #DesignThinking watch www.youtube.com/watch?v=IUIDhU_Zjcc
Creating a powerful allyBoth Mobile Academy and Mobile Kunji are presented in the voice of a female doctor character - Dr Anita. She has been created with the express aim of being trusted and respected by health workers and families alike. She is the voice of authority, but has a great bedside manner and speaks the local language. For families who rarely have the opportunity to see a doctor face to face, Dr Anita is a powerful tool and ally for Sarika. Dr Anita adds a new edge to Sarika’s conversations, she makes her more confident, more credible.For more details on #Impact watch www.youtube.com/watch?v=KtI-XgCuhTgUser-centric designA series of user-testing amongst health workers helped us fine-tune both these services. It enabled us to come up with an IVR-design that needed minimum navigation. It also helped us design and create content that is engaging, in the right dialect, using their particular vocabulary for technical information.Design for scaleWe started out with the assumption that these services would be implemented across the country. So they were not designed as pilots. Mobile Acaedmy is currently accessible to 150,000 Sarikas, and will scale to reach nearly a million health workers. Mobile Kunji is spreading its footprint beyond Bihar, in three states, and is being used by over 46,000 health workers.PartnershipsPublic and private sector partnerships underlie sustainability. BBC Media Action’s partnership with the government is supported by its partnerships with the Bill & Melinda Gates Foundation, USAID and the Barr Foundation. This makes it possible for our mHealth services to touch millions of lives, and have significant impact at an unprecedented scale.That technology can transform health systems, break barriers of communication even among the poorest, and empower millions with its simplicity has never been in doubt. What this model proves, is that the best solutions build on something that people already have in their hands. It does not wait for advancement of technology. Rather, it innovates with what is already in use.Finally, it is about empowering women professionals so that they can help other women. A new model of sisterhood, if you like. As Sarika leaves for work every morning, Mobile Kunji tucked in her bag, Dr Anita’s words from Mobile Academy ringing in her ears, she lives the oath she has taken… “I believe I can bring about a new dawn of change in every life… because I am a stakeholder in building a better, healthier India”.